Precision cleaning means a surface treatment process in order to remove contaminants from a surface at a micro-level. For high-tech industries such as aerospace, medical, pharmaceutical or electronics stringent cleaning requirements apply. Failure to remove contamination at micro level might have significant effects on product reliability and performance. Therefore consideration of below parameters plays a vital role in the selection process of appropriate process, material, and equipment;

In nature salts and oxides are soluble only in water whereas oils and greases are only soluble in hydrocarbons and solvents in other words “like dissolves like“.  Because of this reason, solvents have a much broader process window even though water could work with adding a detergent. 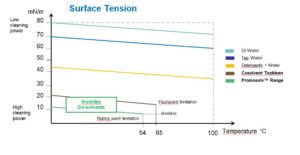 Internationally standardized solvency power is measured as Kauri Butanol (KB) value which is determined by ASTM D1133. A higher KB value means higher solvency power but in some cases, it also means toxicity and ozone depletion. For example, the U.S. Environmental Protection Agency (EPA) has proposed banning TCE in vapor degreasing and has targeted nPB as one of its top 10 chemicals to undergo risk evaluation to determine if it presents an unreasonable risk to humans. The European Union has already banned TCE in vapor degreasing and nPB is scheduled for 2020.

In the early 1990s with the implementation of the Montreal Protocol,  aqueous systems were favored to eliminate ozone-depleting solvents such as CFC-113, HCFC-141b, and 1,1,1-trichloroethane but, thanks to new technologies a big range of non-ozone depleting solvents are now available. Together with the improvements in equipment design, vapor degreasing is the cheaper and more environmentally friendly process.

On its basic configuration, there are 2 sumps inside a vapor degreaser. The first sump boils the solvent and creates the vapor phase. Then cooling coils catch pure vapor and condensate back to rinsing sump through water separator. In this way, rinsing sump stays clean all the time which means that the vapor degreaser is actually recycling solvent also while it is running. Ultrasonic generators are attached to both sumps to give additional agitation. Note they are optional and can be turned off since ultrasonics might be a concern for a certain product.

Simply, parts are lowered into the vapor phase or immersed into boiling sump. At second step parts are moved into second sump or vapor phase again for rinsing. At the final step, parts are slowly moved out in order to allow cooling coils to catch condensed solvent from parts. In the end, parts are perfectly cleaned and dried. This process generally takes 5-7 minutes which is super fast when it is compared to aqueous systems.